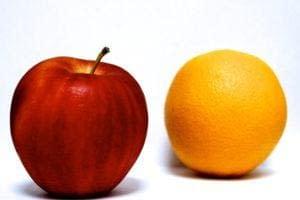 Is a calorie just a calorie? Depends. Is an apple just an orange?

Here are a few fun studies that show “calories in vs. calories out” may not be the whole story when it comes to weight loss or weight gain. I’ll let them speak for themselves.

Adding Calories Via Protein
A recent 2014 study found that weight-lifting individuals who consumed an additional 4.4 grams of protein per pound of body weight per day (averaging an additional 800 calories per day) did not gain weight. The study notes that “Certainly, this dispels the notion that ‘a calorie is just a calorie’….protein calories in ‘excess’ of requirements are not metabolized by the body in a manner similar to carbohydrate.”

Alcohol Calories
Alcohol may be the prime example that “a calorie is not just a calorie.” Even though alcohol is touted as being “high in calories” at 9 calories per gram, studies consistently show that extra calories from alcohol alone do not necessitate weight gain. A metabolic ward study found that patients gained NO weight when 1800 calories in the form of alcohol was added to their standard diet. A similar study found that substituting 50% the patients’ daily calories with alcohol yielded weight loss. The study also found that adding 2,000 calories of chocolate to a patient’s diet steadily increased weight, while adding 2,000 calories of alcohol negligibly affected weight.

Time Restricted Calories
Eating in restricted time windows (a la’ intermittent fasting) rather than constantly throughout the day, also affects how calories are treated. In one trial, mice who overate calories throughout the day gained weight, while mice who ate the same amount of calories, but in a restricted time window, did not. The study suggests that “the temporal feeding pattern reprograms the molecular mechanisms of energy metabolism and body weight regulation.”  206

Adding Calories Before Exercise
A 6 week study on humans eating a high calorie, high fat diet (30% more calories than they needed), found that if they exercised while fasting, they did not gain weight, despite eating more calories in total than burned. If they exercised after eating (in a normal meal pattern), they did.  The study concluded “fasted training is more potent than fed training to facilitate adaptations in muscle and to improve whole-body glucose tolerance and insulin sensitivity during hyper-caloric fat-rich diet.”

If you want the whole story, check out Good Calories, Bad Calories: Fats, Carbs, and the Controversial Science of Diet and Health

by Gary Taubes. Or his more digestible (no pun intended) Why We Get Fat: And What to Do About It