A Sweet Guide To Scary Sugar

Now that we’ve got fat out of the way, it’s sugars turn! Unlike fat, sugar is nasty stuff, promoting inflammation, oxidative stress, glycation, free radicals, and the “bad” type of cholesterol. Sugar is also strongly correlated to many forms of cancer. Perhaps most significantly, sugar instigates an insulin response, encouraging fat storage, obesity, and diabetes. While I’d simply love to elaborate on how terrible the sweet stuff is for you, the purpose of this post is to break down the different types of sugar, and look at some “Paleo” (Hah!) versions. (Honey and Agave, I’m looking at you.) 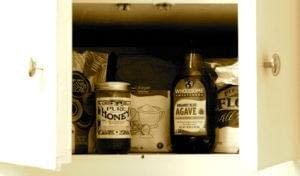 “Sugar” is a general term referring to the sweet stuff we get from simple and complex carbohydrates. Simple carbohydrates are “simple” molecules of sugar, like you find in table sugar or refined flour. (That’s why there’s flour in the picture above. #Onpurpose) They break down very quickly in the body, easily spiking blood sugar. Complex carbohydrates are chains of sugar molecules found in starches like sweet potatoes, tubers, and whole grains. They take longer for the body to break down and affect blood sugar at a more “steady” rate.

Here are two things about sugar which many people don’t grasp:

1. Every carbohydrate you ingest regardless of the original source (candy, cereal, bread, pasta, potatoes, rice, fruit, vegetables, etc.) is ultimately converted into blood sugar (glucose). Even if you eat a piece of broccoli, that broccoli will partly become blood sugar, albeit a relatively negligible bit. This also means a fruit and vegetable based diet is a sugar based diet. Even if you only drink green juices, that is still a lot of sugar.

2. Although commonly used and intensely monitored by the body, there is no actual requirement for carbohydrates. Our body can generate the minimal amount of glucose it needs from protein and fat (if necessary) via a process called gluconeogenesis. However, it cannot generate protein or fat (the foundation of the body) from any other substrate.

GLUCOSE
Glucose is a monosaccharide, or single unit sugar. (Two glucose molecules joined together make maltose.) Most carbohydrates you eat are processed into glucose in the body, where it becomes “blood sugar.” Oh hey! Glucose is found primarily in vegetables, nuts, and grains. It’s often “starchy.” It can be used immediately for energy, or stored as glycogen in the muscles and liver. When glycogen stores are filled, excess glucose is stored as fat in cells.

FRUCTOSE
Like glucose, fructose is also a monosaccharide, or single unit sugar. It is a “fruit sugar,” common (not surprisingly) in fruit, but is also found in vegetables. Unlike glucose, which immediately enters the bloodstream and raises blood sugar, fructose is processed primarily by the liver, and therefore has little immediate effect on blood sugar. So that’s cool. EXCEPT NOT REALLY. When processed in the liver, fructose promotes fat storage rather than oxidation. Once processed into fat, fructose is shipped out on proteins, raising triglyceride levels in the blood stream. Fructose also does not raise leptin levels which regulate satiety, so fructose does not quell the appetite. Fructose encourages the formation of advanced glycation end-products (AGEs) which accelerate aging, and is linked to non-alcoholic fatty liver disease, pancreatic cancer, metabolic syndrome, and high cholesterol. Fructose is kinda just bad news.

SUCROSE
Sucrose is a disaccharide, or combination of glucose and fructose in a 1:1 ratio. It is usually produced from refined sugar cane or sugar beets, and appears as white table sugar. Sucrose is highly inflammatory in nature, while its glucose/fructose combination makes it especially problematic. Sucrose misleadingly registers lower on the glycemic index compared to glucose, but this is due to its fructose content, which minimally affects blood sugar in the short term, as discussed above. The presence of fructose, however, renders sucrose all the more dangerous. When you ingest sucrose (glucose + fructose), the glucose part enters the bloodstream, encouraging insulin release, while the fructose goes to the liver, encouraging fat storage. Can you say bad combination?

HIGH FRUCTOSE CORN SYRUP (HFCS)
More than 40% of added caloric sweeteners in the US is in the form of high fructose corn syrup (HFCS), the premiere sweetener of processed foods and beverages (especially soft drinks). Americans on average consume around 60 pounds of HFCS per year. Between 1970 and 1990, HFCS consumption increased more than 1000%, mirroring the rise of the obesity epidemic. While different versions exist, HFCS yields close to a 50/50 ratio of glucose and fructose, but in liquid form, making it essentially liquid sucrose. BAD NEWS BEARS! Readily available to the body in liquid form, HFCS takes the glucose + fructose problem of sucrose and makes it much worse. (The glucose part spikes blood sugar and insulin, while the fructose part promotes fat storage.) HFCS is nefarious stuff, strongly correlated with the obesity epidemic, diabetes, and all the problems arising from such. In fact, rats with access to HFCS gain significantly more weight than those with access to sucrose, even when they consume the same amount of calories. (So much for the whole Calories theory.)

HONEY
Honey is probably the most natural “sugary” thing you can find in the wild. Like sucrose and HFCS, honey features fructose and glucose. Unlike refined sugar, honey contains minerals, amino acids, antioxidants and B vitamins. However, honey is comparable on the glycemic index to white table sugar – both are in the low to mid 60s, and is high in the nefarious fructose. If you’re trying to eradicate your sweet tooth, honey probably won’t help matters much. While many Paleo people consume honey, it’s hard to justify any refined sort of sugar in the diet. I vote avoid honey, and get your nutrients and sweetness from whole food sources. (There’s nothing in honey you can’t get from other whole foods, and without the insulin spike.)

AGAVE
Agave nectar is a highly concentrated sweetener produced from the blue agave plant – a flowering plant which looks like a cactus. (It’s also the same plant which gives us tequila.) Agave nectar can be up to 90% fructose, which is substantially higher than high fructose corn syrup’s 50%. This is really bad news. Fructose is metabolized primarily by the liver, promotes fat storage, fails to induce satiety, and can contribute to non-alcoholic fatty liver disease. Avoid agave. Your body doesn’t care that it was once a plant. It’s basically just refined liquid fructose.