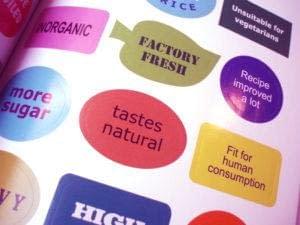 Oh food labels! These days, you can’t just simply go to the grocery store and pick up a slab of meat. (Don’t let’s be silly!) That would be waaayyy too easy. Instead, you must navigate a labely jungle of never-ending promises (Natural! Cage-free!), significantly varying price points, and questionable levels of quality. Indeed, the many labels in the supermarket today are vague, skewed, and typically misleading, insinuating conditions not entirely true in order to make a profit. So here’s the deal on what those labels really mean, if you were wondering.

“USDA ORGANIC”
“USDA Organic” is the crème de la crème of food labels, the one most regulated by the USDA (United States Department of Agriculture). It signifies how the products are raised/grown and processed. Organic products preserve natural resources and biodiversity, and are kept separate from non-organic products. The label is especially relevant from a Paleo perspective, since organic farming is intended to mimic natural, wild conditions.

Organic crops are grown in safe soil with no synthetic fertilizers, synthetic pesticides, genetically modified organisms (GMOs), or irradiation (chemically modifying the crop with radiation for preservative purposes). Consuming organic produce is important for health because it minimizes exposure to toxic pesticides, which tend to coat conventional produce (ew). You can check the non-profit Environmental Working Group to see which produce currently harbors the highest and lowest amounts of pesticides. As of 2014, common Paleo produce highest in pesticides were apples, strawberries, celery, spinach, blueberries, lettuce, and kale. Common Paleo produce lowest in pesticides were avocados, cabbage, asparagus, cauliflower, and sweet potatoes.

Organic meat means the animals consumed organic feed with access to the outdoors, and were given no antibiotics or growth hormones. Eating organic meat is important to minimize exposure to toxins, which accumulate in an animal’s adipose tissue. Whatever the animal ingests (be it antibiotics, vitamins, Omega-3/6s, etc.) is ultimately what ends up in you. Because of this, fattier cuts are more “important” for the organic seal than leaner cuts. However, when it comes to meat, truly “grass-fed” (see below) may be even more important than organic, since it signifies the type of diet consumed by the animals, which ultimately determines their nutrient levels and Omega-3/6 ratios.

“GRASS-FED”
“Grass-fed” is a vital term in spirit, which bears grey areas in reality. It means the livestock were pasture raised, which is especially important for beef, since cattle naturally consume grass. Grass-fed beef yields a much more optimal omega-3/6 ratio (1:1) than grain-fed beef (6:1). On the downside, this label does not address the use of antibiotics, pesticides, or GMOs, and the animal’s diet can still be supplemented with grains if documented. This makes the less common term “grass-finished” even more important.

“FREE-RANGE”
This term is positive in theory, but potentially misleading in reality. While regulated by the USDA, “free-range” simply means the animals were not caged and had access to the outdoors. Whether or not they actually ventured outside is up for debate, while the “outside” area itself could be small and netted.

“CAGE-FREE”
This term is perhaps the most misleading. It means the animals were not in literal cages and had constant access to food and water. However, they still may have been in cramped, interior spaces. In fact, the official USDA site assumes that “the flock was able to freely roam a building, room, or enclosed area” – they’re not frolicking fields here, folks.

“VEGETARIAN-FED”
This one is ridiculously misleading. I see it and laugh. It simply means exactly what it says: the animals ate vegetarian feed. This could still be GMO, or corn/soy feed, so it’s rather pointless from a Paleo perspective. Grain-fed is vegetarian-fed, and we’re not fans of grains around here!

“NATURAL”
This is a very vague term. By USDA standards, it only applies to meat and eggs, and simply means “minimally processed” with no artificial ingredients. Produce labeled “natural” is not regulated at all.

“PASTURE-RAISED”
This one sounds great in theory, but isn’t regulated at all. Proceed with caution.

“NO ADDED HORMONES”
This means the animals were raised without added hormones. (Surprise, surprise.) It’s really only applicable to beef or dairy products, since federal regulations have never allowed steroids or hormones in poultry, pork, or goat. Chicken with “no added hormones” is just a trick to get your money. Sneaky devils.

If all those labels seem a little cray cray, here’s a summary. “USDA Organic” is ideal for everything. For produce, it really is all you need. If money is an issue, refer to the Environmental Working Group and choose organic for the produce highest in pesticides. For meat, favor organic and preferably “grass-fed” or “grass-finished” cuts (especially for the fattier meat). Think about it this way. Plants universally “eat” sunlight, so the dangers come from whatever is put on them. But what an animal eats varies, and ultimately determines the nutrients and Omega-3/6 ratio in its meat. As such, the animal’s diet is quite important.

When all’s said and done, conventional produce and meat is still better than processed foods, sugar, and grains any day! “I can’t  afford organic so I’ll just buy pasta” is not a good excuse. Sorry Charlie.