My Thoughts On T. Colin Campbell’s “Whole” (With A Nod To The China Study!)

On the one hand, I could not agree more with Campbell’s framing metaphysics and epistemology. He believes consuming an entirely whole foods diet is the key to health (yes!), that current nutritional research is reductionist, looking at the individual bits of the body rather than the whole system (yes!), that the US’s health care system today merely addresses symptoms and perpetuates (if not causes) disease (yes!), and that the healthcare system as a whole is profit driven (yes!)

So what’s the problem?

Well, the biochemist Campbell (though I’m sure he’d loathe such reductionist scientific descriptor) co-authored the 2005 bestseller The China Study, based on the results of the 20 year China-Cornell-Oxford Project, an epidemeological study of chronic disease and mortality as related to diet, in 65 Chinese counties. The study concluded [cue ominous music] that animal-based food consumption lead to higher illness and death rates, compared to plant food consumption. With this foundation, a complete fear and loathing of animal fat and protein haunts Campbell’s followup Whole, published 8 years later, which continues to laud an entirely plant based diet. More on that to come.

Campbell’s searing critique of the Uniter States’ health-care system (what Campbell dubs the “disease care system”) could not be more enlightening. He maintains the system is reductionist in nature, meaning it treats individual symptoms as the main issue while ignoring the holistic, root problem underneath. This disease care system wears a geographical lens when treating individual diseases (arthritis, obesity, cancer, heart, disease, etc.) with drastic measures such as surgeries, immunosuppressants, chemotherapy, and a myriad of drugs. Furthermore, numerous prescription drugs are needlessly and perpetually prescribed for “less” serious ailments like headaches, depression, and IBS, and simply mask symptoms without addressing the broken foundation. The foreign and inflammatory nature of these drugs often cause more damage than they solve.

Campbell maintains that this present system (encompassing everything from doctors to drugs to policies to agriculture to schools to laws, etc.) is completely driven by monetary gain, rather than any search for truth. Questions of potential research are determined by what will yield lucrative results for the pharmaceutical and business industries. “Legitimate” studies are overwhelmingly controlled and reductionist, ignoring overall patterns and nutrient interactions in favor of specific pathways which may or may not be applicable to actual health. The intended audience of scientific research is not the general public, but rather the media, government, and other private influencers of policy. Evidence is distorted, while selfish behavior is rewarded. The spawn of this biased system – the many pills and prescriptions-  are forced upon doctors and supported by the media. All the while, politicians and advocate parties, stuck within the monetary paradigm, propose “fixes” by controlling and shifting costs rather than addressing the actual disease.

I’m so down with all of that. So. Much. In fact, Campbell even had me near convinced to toss a good amount of my nutritional supplements (though not quite!) So again, where’s the problem?

My intention with this post is not to address the entirety of the China Study and its flaws. First of all, that’s a different book entirely, and second, some people have already done this way better than I ever could, analyzing the egregious amount of cherry picking, startling omissions, and faulty conclusions drawn by Campell et all. I refer you to Denise Minger’s excellent and overwhelming exhaustive analysis: The China Study: Fact or Fallacy? Denise’s post is so #onpoint that the great Campbell himself took time to address it. (By the way, Denise is a “Paleo” yet very plant based woman, which makes her the ideal
type of person I would want to analyze the study.)

If this topic interests you, please do yourself a favor and read Denise’s post. That being said, I’d like to address two primary issues which Denise (and others) discuss from the China Study, which overwhelmingly infiltrate Whole. These are the two main issues I immediately “identified,” and was relieved to find were actually “a thing”when I went a-googling later: namely, The China Study’s epidemiological nature, and its grossly overstated assumptions about animal protein. 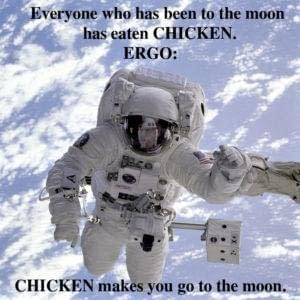 Campbell looks at healthy plant-based whole food populations and concludes that diet is the optimum road to health. No problem there. However, Campbell falls prey to the very issues of research data assumptions which he critiques, forming very causative assertions based on correlational epidemiological data.

What’s an example of faulty epidemiological conclusions? Let’s say you’re an alien living on some planet where it’s always hot, and everyone wears minimal clothing all the time. Now let’s say you come to earth to study the people, and there’s the whole “cold” concept. And you notice that when it’s “cold,” people wear things called jackets. So you conclude that jackets cause cold. Becuase everytime it’s cold…there are jackets! Makes sense right? That, my friend, would be an erroneous epidemiological conclusion confusing correlation with causation.

In Whole, Campbell asserts it is the lack of animal protein in Chinese diets which causes health and prevents disease. However, the health could just as easily be due to a myriad of other factors, from dietary (a lack of processed foods and sugar), environmental, or social. Allow me to share some of Denise’s findings re: Cambell’s conclusions:

CASEIN PROTEIN
For me, this one is the kicker. Campbell takes his findings that the casein protein (which is found specifically in dairy products) promotes cancer in rats, and automatically extends it to all animal protein. Everytime he did this in Whole, I wanted to look up at a random person and be like, Did he really just make that assumption?  To me, it’s akin to saying “Poison ivy is bad for you, so don’t eat any leafy greens!”

There’s a reason the Paleo-sphere debates over dairy, as casein is accepted as potentially inflammatory or allergenic for some. Dairy is also a vigilant growth promoter rampant in hormones from animals not of our kind (i.e.: cows), often pumped with antibiotics and growth hormone to boot. In other words, dairy (especially conventional) is a potentially dangerous world. But dairy is, in no way, the same thing as animal meat. As Denise notes, “It seems ironic that Campbell censures reductionism in nutritional science, yet uses that very reductionism to condemn an entire class of foods (animal products) based on the behavior of one substance in isolation (casein).”

All of that said, I could almost accept Campbell’s 100% plant-based diet parade with little protest, if he didn’t proceed to bash low carb concepts throughout Whole. I find it disconcerting that Campbell so readily attacks dietary protocols which eradicate sugar and refined flour, simply because they maintain animal consumption. (Note: No where does Campbell mention the detrimental health effects of grains and gluten).

While I personalize believe a whole foods Paleo approach is ultimately ideal (aka: meat, fruits, veggies), I do not demonize plant-based approaches, because I realize such ways of life might work for some people, and may be non-toxic and health promoting if they are indeed whole foods based. In a phrase coined by Robb Wolf, I like to see the whole foods movement as “macronutrient agonistic,” and thus accepting of various carbohydrate level approaches. Yet Dr. Campbell, extends his casein protein=all animal protein=all animal products= cancer thesis, to mean low carb diets are equally detrimental. As such,the whole foods Paleo diet (which includes animal products and is potentially low carb), the meat-heavy Atkins diet, and even “low carb” in general, are all presented as fads at the least, and as dangerous at the more extreme. While I agree that low carb did become sensationalized and profit driven under the Atkins empire (as, one can argue, “Vegetarianism” has in the processed food market), I do not see this as an interpretation of the “scientific” nature of a low carb diet’s approach to health. Doing so would be, in my opinion, reductionistic – the very thing Campbell is trying to avoid.

Campbell looks at healthy plant-based whole food populations and concludes that diet is the optimum road to health. No problem there. The problems lie in the conclusions Campbell draws from epidemiological studies, extending the cancer-promoting profile of casein in rats to the damnation of all protein. This is, in effect, completely contrary to his assertion to not make such assumptions.

For me, I think different diets work for different people, but in the end, it is likely the toxins, additives, processed, and refined nature of today’s food which is killing us. Not animal protein. Not even, dare I say, a lack of fruits and vegetables. (Though either could play a supporting role). I still maintain a pure, whole foods approach of plants and animals, is ideal for our omnivorous nature.

In the end, Campell’s “holistic” view is only holistic if you live in a plant-only paradigm.