I Broke Up With Zyrtec.. And It Feels AWESOME 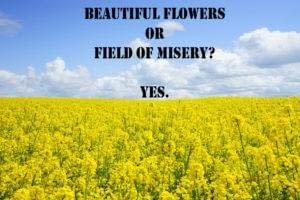 Confession. Despite my overwhelming Paleo-ness, hollers of holistic health, and persistent proclamations that many modern pills simply perpetuate problems, I was nevertheless engaging in a clandestine relationship with an illicit pill. Yep, we’re talking anti-histamines. And like any failed romance, saying goodbye to Zyrtec was hard to do… but totally worth it!

As a kid growing up in the South, I had allergies. BAD. We’re talking the nose running, eye itching, stuffy misery where the thought of Walt Whitman’s Leaves of Grass makes you want to attack something. I lived on Claritin and nose sprays, though even as a child I had a hankering suspicion they were only making things worse in the long run.

Fast forward a decade or so, and my allergies had largely resolved themselves. When you stop freaking out your immune system with the foods you’re eating, it tends to calm down in other areas as well – like environmental allergies. Oh hey! But something sinister lurked on the horizon….

My doomed relationship with Zyrtec began like many an ill fated romance: I thought it was my savior.

About 1.5 years ago, I developed persistent dermatitis, manifesting as eczema on my fingers and psoriasis around my mouth. For those of you who’ve experienced such misfortunes, you know the misery. I’d spend hours scouring the internet for holistic and topical treatments, trying every herb known to mankind. (Oh hey zinc, coal tar, diaper rash cream, etc.)

I saw a dermatologist who prescribed a myriad of topical treatments, which I reluctantly used… but still the rash persisted. After the 3rd or so prescription thrown at me, I switched to a dermatologist who was also an MD, with a bigger picture approach. “Clearly you’re allergic to something,” she said, ordering a complete environmental and food allergen test. While getting the allergy panel was awesome (I found out I was officially allergic to wheat, sesame, and practically every grass known to mankind), she also made a tiny problematic suggestion: take Zyrtec everyday.

In other words, allergies occur when our body determines something which isn’t that bad, is that bad. (Unless it actually IS that bad, like say gluten.) In any case, everytime you encounter said allergen,your body is just like OMG ATTACK NOW, and you get all these awesome inflammatory side effects like itching, sneezing, and the like. Fun times.

Here’s how allergies work on a VERY basic level. (I’m majorly simplifying here). Your body makes things called Immunoglobulin E antibodies (IgEs), assigned to various allergens (“bad guys”) which your body’s governing system has deemed dangerous. These allergens could be anything from grass pollen to your cat’s hair to dust mites. The IgEs are like security guards specifically looking for that ONE bad thing. When they detect them, they signal Mast Cells to release Histamines, an immune chemical which dilates blood vessels and results in the yucky side effects of sneezing, itching, etc.

As you may have guessed, antihistamines work by blocking the receptors which detect the presence of histamine. So when you encounter one of your personal allergens, your personal IgE is like RELEASE HISTAMINE!… which happens. But since the histamine receptors are blocked by the antihistamine you took, your body doesn’t actually react to the histamines. Now this is nice in the short run (no sneezing or itching!)… but not so nice in the long run. 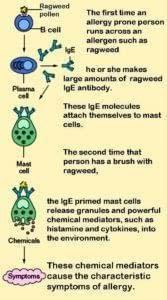 Ya see, antihistamines are temporary. They don’t actually fix the issue, while also bringing a bounty of side effects. First of all, antihistamines block H1 & H2 receptors – the ones responsible for the itching, sneezing, and digestive problems. So you’re temporarily “good” in that area. However, histamines can still attach to the neurological and inflammatory H3 & H4 receptors, potentially leading to depression and/or inflammation. Beyond that, side effects of antihistamines (which may cross the blood brain barrier) include dry eyes, sleepiness, dizziness, moodiness, restlessness, etc. The neurological effects of antihistamines like Benadryl also stimulate dopamine reward pathways in the brain – giving them addictive properties and further encouraging neurological problems. No Bueno.

Like any good dysfunctional relationship, Zyrtec was a lot of love/hate. On the one hand, I loved the skin benefits and anti-inflamamtory effects. I’d pop my little pill, my skin would clear, and my puffiness would subside. My face felt pretty. And my skin rashes began fading.

But the good ended there.

I didn’t realize it at first, but the neurological effects of Zyrtec were creeping in. The pill made me tired and moody. I felt dull, trapped in a greyscale world where things failed to excite. I was also reaching a point where I had to turn to Zyrtec. Like a self-fulfilling prophecy, I’d pop my nightly pill, watching with disillusioned observance as my puffiness subsided, and brain entered an emotionless state of blah.

In the end, I decided dealing with the allergen (whatever it was) in the first place was a better plan to follow. Hiding from the unknown was silly and fearful. By cutting out Zyrtec, I regained clarity and awareness, and was more able to tackle the initial problem. After all, if I was constantly on Zyrtec, how was I going to identify what was causing the allergic response in the first place?

So I did my research. I scoured the internet for allergy clues. I discovered a super
awesome cross reactive allergen chart, showing all the potential foods which might be causing problems, based on known allergies. (Most addictive chart ever award!) In the end, I was allergic to lettuce – which just so happens to harbor proteins similar to grass. Oh hey! (And come to think of it, wheat is also a grass. Sensing a trend here.)

So if your allergies persist despite a Paleo diet, I encourage you to avoid the mainstream antihistamine pills. Instead, become your own detective, and try to figure out the root cause of your allergies. Then avoid said allergens at all cost. Beyond that, by minimizing potentially problematic compounds in your body (oh hey processed foods!), you can encourage your body to stop producing so many IgE’s against substances in the first place.

You can also work on directly minimizing histamine production in the body. Consider supplementing with natural antihistamines, such as quercetin, which stabilizes mast cells, or other herbal blends like Gaia’s awesome Turmeric Supreme: Alergy. For food allergies, you can take the enzyme Daosin to help minizmie histamine production from food. I like the product called Histame. A low-histamine diet can also work wonders. (The linked chart is from the Whole 30). More on that in the future!

Beyond everything, consider saying no to the little allergy pill. It may not be all rainbows and unicorns – our modern, toxic world has done quite a confusing number on our immune systems – but who needs a dull life devoid of emotion? I’d rather feel something, than nothing at all!

Is Your Skincare Making You Fat?