Once Upon A Colonoscopy

I made this black and white, because things look less offensive in black and white. Also, out of the dozen or so pictures, this one looked the most like something from the Magic School Bus. Miss you Ms. Frizzle!

Note: Due to the very concept of a colonoscopy, the following post contains subject material of a potentially TMI nature (at least for my typical sensibilities). I’m writing it because it concerns digestive health, and also because I had feverishly googled the process before undergoing it, looking for personal survival tales to calm my nerves. (And found many horror stories in the process). Here is my account. Proceed with caution.

By avoiding problematic foods, Paleo gifts you with typically immaculate digestion. You feel clean inside and out, perhaps even priding yourself on your “regularity,” as it were. You also become keenly in tune with those substances which your body does not fancy (and is quick to inform you of such.) This is much different from a Standard American diet full of sludge, in which many bad things constantly pass through you. While by no means a good thing, a SAD diet may mean you can “handle” more problematic foods, since your body knows no difference. It’s like having a shiny new car versus a dirty car.  If you make the dirty car dirtier, you really can’t tell so much. (See that lovely splotch of grime I added beneath the door handle?) Put a smudge or dent on a shiny new car, however, and it looks ghastly. But do you say, “Might as well get the dirty car so I can just let it get dirtier without worrying!”  I doubt it.

Having been low carb for 5 years and Paleo for 2, when I do ingest something problematic, things can go south very quickly. 2 weeks ago I ate Korean BBQ. I don’t like such places: the shared food system and likelihood for gluten contamination and sesame (a personal allergy) typically leaves me feeling ill, regardless of how “good” I try to be. (Plus, you just feel so weird insisting on having your “own cooking spot,” especially if in the company of people you’ve just met). So when I got sick after eating said food that fortnight ago, I thought it was an expected, but passing thing. But it didn’t stop. I remained sick for a week. I could barely eat anything. I lost 5 lbs. And not in a “yey I lost weight through diet and exercise!” way, but rather in a “please I just want to eat food and be a normal person and might die if I lose any more weight” type way.

A week of illness passed (including a miserable day in 100 degree weather playing a cocktail waitress on the set of Parenthood.) Finally, I went to see a gastroenterologist. He immediately performed a variety of blood tests, as well as other <ahem> “sample” tests. He ended the affair by saying he wanted me back in 2 days for a colonoscopy and endosocopy. 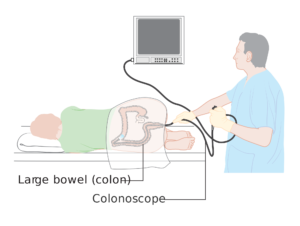 That’s right folks… I was about to get two lovely procedures involving cameras inserted into the digestive system via the mouth and, well, other end. And if that weren’t fun enough, you also get to consume 2 liters of a prescription laxative the night before! While this may be the dream of those who nervously try to purchase laxatives for weight loss (Oh, I thought Magnesium Citrate was a magnesium supplement?), such is not the case with me.

Here’s how it went down.

The afternoon before the procedure, I embarked on my colonoscopy prep shopping trip. I picked up the laxative “MoviPrep,” a title I found satisfactorily appropriate for the whole situation. Of course, rather than an unassuming prescription, they present you with a HUGE box containing all the necessary supplies. As bags are no longer free in these parts, I had the pleasure of carrying the box around Target with a sense of pride.

Next was the drink prep. I could only consume clear liquids that day. Since fasting is the norm for me, I thought it would be a breeze. Not so much. I decided since the process was going to be so miserable, I would indulge in artificially sweetened beverages all day as a treat. (I know, I know). This, however, just made me hungry all day (reiterating my conclusion that artificially sweetened drinks while fasting don’t help.) If you’re wondering, basically every artificial drink out there contains blue or red dye. I checked. Not because I was going to be “half Paleo” and avoid dyes, but rather because they weren’t allowed on the colon prep list. (Apparantly they do dye the inside of your body like my mother always said.) I finally settled on Crystal Light lemonade. It had yellow dye, but heck, that wasn’t on the list. Committed.

I arrived at my humble Hollywood abode and mixed up everything with the dexterity of Hermione in potions class. When I tried the Crystal Light for “taste,” I immediately gulped down the whole thing. Such divinity! Having had nothing artificial in eons, my body proclaimed WHAT IS THIS TASTY MAGIC? I told myself to stop drinking it, as I was going to have to drink a lot more before the night was over, but ’twas irresistible. Curse you processed foods! I also mixed up some homemade jello from stevia-sweetened lemonade. (Jello counts as a “liquid” because it’s liquid at body temperature. Who knew?) I then went on a ravenous internet research tangent looking up different Paleo jello candy and treat recipes. (Paleo marshmallows made with Madeira! Ahh!!)

Now, I was supposed to drink a liter of the carefully prepared MoviPrep solution at 5:00pm, and the other liter at 10:00 pm, along with the Crystal Light. But since I was filled with such anticipatory yearning to get it over with, I started sipping at 4:30. While I had read horrendous reviews about the taste, I found it reminiscent of liquid Pez, with a salty aftertaste. Not too bad. I told myself I was drinking it for funsies. (While this got me through 1.5 liters or so, the last .5 liter was pretty gross. Just. Can’t. Do. It.)

The stuff was supposed to start “working” after one hour. Five hours passed, with no activity. I began to panic – perhaps I was immune to laxatives? However, it began its job effectively around 2 am. This was also bearable, since I was relatively empty from the sickness. By the next morning, I arrived at the surgery center knowing I had never, ever, since I was born, had such a fantastically clean and empty colon as I did at that moment. It was a moment to be had.

The time had come.

I went into the prep room, put on the stereotypical gown, and awaited my fate. I reflected on how I’d been in quite a few hospitals in the past year, but they were all on TV or movie sets, and I was usually the nurse rather than the patient. I answered a myriad of questions about my identity while the nurse set up the IV. It’s true that the novocain shot really is the worst part, and then things are pretty dandy. When they wheeled me to the surgery room, I saw it self-reflexivly as a POV shot.

We arrived in THE ROOM, and I tried not to think about what they were going to do to me. I reflected on 3 comments. A friend who said, “Well, at least they’re not making a hole in you.” My sister, who said, “Well, at least it’s not for torture!” And my mom, who had basically convinced me I was going to die in the laxative prep process, and so by the time I reached the surgery, it’d be a breeze. Thanks mom.

“I’m putting this mask on you, and then you’ll go to sleep,” proclaimed the anesthetist, interrupting my thoughts. He said it in a matter-of-fact way, as though remarking on the weather.

Things were getting real. I felt a slight heavy feeling. Unconsciousness was on the horizon. I reflected on how some things can be so beyond one’s control, like the day turning to night.

Next thing I knew, I was listening to the doctors talking. I thought I was listening to Robb Wolf’s Paleo Solution Podcast. How appropriate. I told the nurse this, and then immediately scolded myself, “Melanie, stop fulfilling the anesthesia stereotype! Pull yourself together!” I then heard the man in the prep room next to me inquiring about the anesthesia, and felt the urge to proclaim, “It’s a lovely process!” However, I did not. I thank my years of college drinking for learning how to just #notsayit.

The nurse asked me if I was “more awake now?” This heightened my suspicions, since it seemed like I had literally just awaken. At what point was I half awake without realizing? Alas. She then presented me with a summary document of the procedure, complete with pictures. (“Here! You can put this on Facebook!”) I studied them with sedated wonder. It’s not everyday you’re presented with pictures of your insides in living color!

After enduring the whole process, the doctor merely found gastritis AKA inflammation. Sigh. (How many times have I typed that word in writing my Paleo book??) I’ll find out about the biopsy samples next week. So I still am in the proverbial dark. However, that night was the first night that I did not get sick, despite a binge on meat and vegetables. So perhaps the whole laxative process got rid of whatever problematic substance was in there. Maybe it was gluten contamination. Maybe it was sesame. Maybe it was food poisoning. Maybe it was something else.

All I know is, you should still pick the shiny car. And if you ever have to get a colonoscopy or endoscopy, you shall survive! Plus you’ll forever have pictures of your insides. How cool is that?